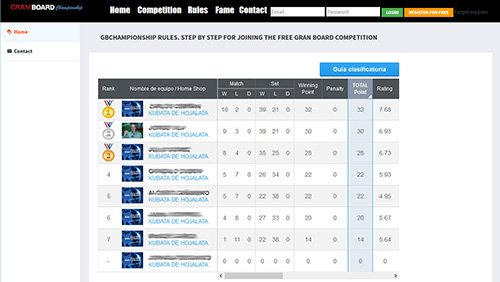 Have you already ask for participate in a league?. If not, go to Championship Tab and choose the level in which you want to play

Next league will be distributed in 8 contestants, and you will hace to play twice with each other, one being Home and one being Away.

Each play will consist of 3 matches, 701, Cricket and 701 and will be played in that order. It's up to you to end the 701 in Master Out mode (it means ending with a double, triple, or bull)

Once you are done, will have to come back to this site to introduce the results, and it will be confirmed by the other party.

You have 6 weeks to end all the matches.

What are you wating for?...Come on!